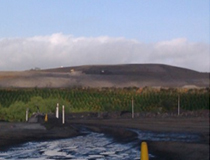 Project Scope : Move nine 730E and 777D dump trucks from the Huntly Mine in New Zealand to the client’s Australian operations as quickly as possible. Ship the 730E’s to Perth via Brisbane to avoid the 8-12 week quarantine washing queues.

In New Zealand, services provided included, pre-shipment cleanliness inspections, transport to Auckland Harbour, removal of truck tyres for transport, and refitting of tyres at port for driving trucks onto the RoRo vessels. To save time the equipment was shipped to Brisbane where it was discharged at the wharf and transported to a washpad under police escort for cleaning and DAFF Biosecurity (Quarantine) Clearance.

The 4 x 730 E’s were required back in Western Australia in a hurry, and the equipment was back at the port ready to be shipped as a Coastal Sailing to Fremantle within 5 days of arrival in Brisbane.

The 5 x Caterpillar 777D’s were destined for a mine in Whyalla SA and after clearing customs and DAFF Biosecurity, they were shipped by road transport to Wyhalla, South Australia.

Location : Huntly Mine Site on the North Island of New Zealand

Delivering Client Benefits : By shipping the cargo via Brisbane and utilising a 24/7 DAFF Biosecurity Washpad, delivery time to the clients site was advanced by a remarkable 8-12 weeks for the 730E’s, due to the backlog at the Western Australian Washpads. Pre shipment cleaning at the Huntly Mine Workshop site prior to shipping to Auckland Harbour. The devil’s in the detail – as part of pre-shipment cleaning process to avoid re-export, the Biosecurity Consultant team ensure that every centimetre of a machine is thoroughly cleaned. Here the front grill is removed to remove dirt and insects from the radiator. The 730E and 777D dump body’s and tyres are removed in preparation for transport to Auckland Harbour and shipping to Perth via Brisbane. Such large vehicles require detailed planning to move mostly due to the oversized knock down components. In transport from the mine site to Auckland Harbour, bridges were cleared over the Waikato River with only centimetres to spare. Tyres were removed from the dumptrucks once on transport trailer to reduce width and transport had to be co-ordinated for units to arrive within the allocated free time period for receivals for the exporting vessel. By developing detailed transport plans, the challenges were overcome and the risks mitigated in order to meet the Vessel sailing time for each of the shipments.