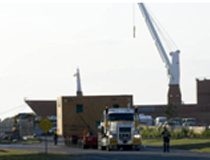 After an 8 week journey from Rotterdam, the star of Brisbane’s North South Bypass Tunnel landed in Brisbane on Monday 24th September 2007.

The unique Herrenknecht TBM is the world’s largest hard rock double shield machine and one of the most important components of the Brisbane Lord Mayor’s TransApex vision that aims to reduce traffic congestion through the construction of a network of tunnels that will link the city’s key growth corridors. A spectacular push-pull operation was performed from the port, across the Gateway, and onto the Inner City Bypass to deliver the TBM to its final destination at Bowen Hills

While the TBM was completed in May 2007, the journey to Brisbane was a logistical challenge. Some 2,200 hours were spent on planning and execution to manage the door-to-door delivery. After its production at Herrenknecht’s factory in Schwanau, a six week dismantling process took place to be able to load the TBM onto trucks to transport it to a barge at Kehl. From there, a four-day barge trip along the Rhine River saw its delivery to the Rotterdam Port where it was finally loaded onto a freight ship for Australia.

The project required adherence to tight deadlines and as a result a specialised vessel from the US was used. The heavy lift capacity and increased knots (speed) of the vesselensured that the TBM arrived on time. The route to Australia from Germany was via the Gulf of Mexico, through the Panama Canal and across the Pacific to the Port of Brisbane.

Team members were on the ground in Germany while the TBM was being built to oversee the dismantling, loading and European land/sea component of the journey.

There was also a strong focus on administrating the project, securing various permits and certifications, coordinating the trucks with the LBBJV project team and organising the delivery and assemblage of the TBM at site.

Safety and due diligence were always ensured to the highest standard. The entire Inner City Bypass was independently surveyed by structural engineers to guarantee soundness. The trailers were inspected by an automotive engineer to certify that their hydraulics would evenly spread the 190 tonne weight across the 25 metres of trailer. Mechanical engineers also certified that the geometrics of the trailers were in accordance with the route that the TBM travelled, thus making sure that nothing was too wide or high on the road.